A proposal for a "New Financial Architecture" has emerged in Ecuador as a response to the previous neoliberal financial model, to reclaim the role of the state in financial regulation. It aims to strengthen the state's monitoring system and its institutions and build a financial safety net to avoid catastrophic events in a crisis, like the one experienced in Ecuador at the end of the 1990s, which resulted in the adoption of the U.S. dollar as Ecuador's official currency. Furthermore, this proposal seeks to adjust the monetary and financial framework of the Central Bank to the country's system of dollarization. An additional and equally important component, which reflects a political economic strategy is the inclusion of the so-called "popular and solidarity financial sector" (sector financiero popular y solidario)—which includes credit unions, savings and credit cooperatives, community banks, and so on—as a focus of this new domestic financial architecture. The proposal thus seeks to expand financial services, in particular, to the rural sector.

Current Ecuadorian President Rafael Correa's broader political program called the "Citizens' Revolution," has prompted a restructuring process of its domestic financial architecture through a combination of legal reforms, new public policies, and the transformation of the national payments system. As part of this endeavor, a new mobile money system is being introduced to diversify the available forms of payment.The mobile money system will be executed and administered by the Central Bank of Ecuador (BCE), making it the first ever publicly mandated and Central Bank-administrated mobile payments scheme to be implemented in the world. 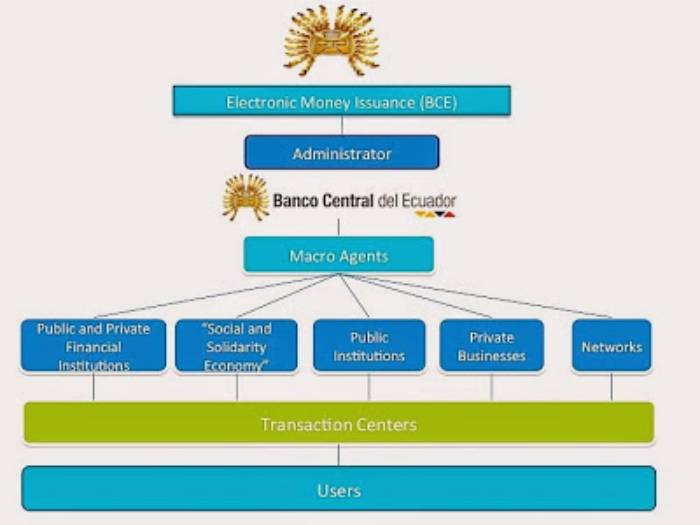 Javier Félix is a consultant with extensive experience working with non-government organizations, credit cooperatives, and private and public institutions. Javier studied Business Administration with a specialization in finance at the Pontifical Catholic University of Ecuador. He has a further specialization in Development Projects and received a Masters in Development Management from the Andean University, Simon Bolivar. He has experience working with NGOs in the implementation of development projects. Javier has also worked with financial institutions that are part of the "Social and Solidarity Economy." He researches complementary, alternative and local monetary systems.

Monica Pozo is an economist and a graduate from the Catholic University of Ecuador. She is currently working in the National Secretary of Planning and Development office (SENPLADES), the institution in charge of designing and evaluating the implementation of the National Plan of the current government. She has also worked in several consulting projects for the Ministries of Education and Health, and the Inter-American Development Bank.

Link to executive summary: The New Financial Architecture and the Public Mobile Money System in Ecuador