Network Linkages and Money Management: An Anthropological Purview of the Beesi Network amongst the Urban Poor Muslims in Old City Area of Lucknow, India.

This project will attempt to study how the poorest of the poor are able to survive and manage their monetary resources with minimal risk. It consists of ethnographic research among conducted among the Shia Zardozi (embroidery) workers in old city area of Lucknow, India, who invest in Beesi networks. Beesi networks are informal groups of 20 women who pool their resources to manage risk. 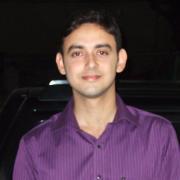 Syed Aiman Raza has his PhD in Anthropology from the University of Delhi in Delhi, India. He received a doctoral fellowship from the Indian Council of Social Science and Research (ICSSR) and lectures at the Shia Degree College.

This study contributes to research on informal financial networks known as Beesi among poor skilled Zardozi (embroidery) workers in Lucknow. Beesi are a kind of rotating savings and credit association. Each member contributes a weekly or monthly sum and the pot is given to a member selected randomly by lottery. In these Beesi networks, members can transfer their right to the funds to another person in the network. The study also documents other money management practices, and provides quantitative data on food, medical and educational expenses for a population experiencing poverty, large income fluctuations and ethno-religious segregation.
Research was conducted among 60 households belonging to the Athna Ashari Shia sect who are involved in embroidery work from two distinct Shia-dominated districts. Purposive sampling was done to target the poorest and most vulnerable members of the Zardozi occupational group who earn on average less than US$2/day throughout the year. A census was conducted as well as participant-observation and in-depth, narrative interviews. Women and men were interviewed individually; focus groups were also conducted. Zardozi is not merely needlecraft but also a vestige of a bygone and more opulent era. Embroidery using gold and silver threads, precious stones and patterns on velvet, chiffon, crepe and silk evoke nostalgia for the past age of Shia Nawabs, the honorific used by rulers of Avadh after the disintegration of the Mughal empire. Not surprisingly, despite their poverty every Zardoz today proudly claims to be a part of this illustrious heritage. The craftsmen trace the genesis of this art to the prophet Yosuf (Joseph) and his famous robe. During the last three decades there has been a resurgence of the craft related to the desire for “ethnic couture” for bridal wear and for the fashion industry in India and beyond, with a boom in exports to Europe and the Middle East. The migration of Zardoz to Saudi Arabia and Dubai has become more common, as well. Cultural notions of dignity distance this Shia community from other skilled occupations like butchery or cooking, allowing them to escape the stigma attached to lower caste groups.
The longer ethnography resulting from this research documents the organization of work among the Zardoz, many of whom are self-employed but connected to an office or local boutique. Offices receive orders – some very large – and distribute them to branches, local groups of Zardozi, and seeks the lowest possible rate for the labor. Negotiation over nafri or daily wages is intense. Due to the complexity of the design of a particular order, the actual hours worked often exceed the amount previously negotiated with the office, however, leading to requests for higher nafri, which cause offices to reject completed pieces of cloth. The branch still has to pay the nafri to the workers, however. Zardoz cannot get work directly on their own, and so are bound to the offices and branches. As one 50-year old self-employed Zardoz states, “We cannot bring work directly from the metro cities like Delhi and Mumbai for a simple reason: it requires a lot of capital investment… The Offices bag orders from Delhi, Punjab, Mumbai, and local shops. … Offices get bulk orders, 500-1000 pieces in a season. They get their payment only after all the pieces are cleared and checked by the shops or business houses. … [So] only Offices can afford to invest such huge sum of money with risk.” Zardoz and Offices try to guard their designs, and Zardoz also alter designs subtly based on the wages offered. The research tracked the seasonal variations in income received as well as expenses. It also documented the everyday struggle for electricity, since lighting is needed for the intricate work. Informal (and often illegal) means of obtaining current abound, with people paying rent to friends with regular electrical service in exchange for a hook connected to their line. Electricity cuts into the nafri of a Zardoz: often a worker will be paid a certain wage for 8 hours of work ($1.67-$1.88) but will be offered double if he works an additional 4 hours. However, there are only so many hours of adequate light in the day.
Zardoz tell stories of better lives in Saudi Arabia, where working conditions are better and according to one interviewee there are “stringent rules and regulations” which “helps you reap benefits from your tireless attitude and hard work.”
Festivals and majlis or “sittings” at home involving relatives and friends retelling religious stories are important but expensive. The research documents the seasonal and ongoing expenses associated with these social and ritual obligations. Yet these events also promote informal lending of small amounts of money, milk, sugar, tea, kerosene and wheat. Beesi – informal savings associations – turn out to be key to easing out the money crunches that occur because of religious obligations and big ticket purchases like school fees, clothing, medical expenses and marriage. The Zardoz find Beesi uncomplicated, localized and efficient, and have no other saving mechanism. They view the risk levels as low mainly because of trust established through existing social ties. Beesi organizers pay in case a member defaults, and so the organizers remain on their toes when receiving weekly or monthly installments from members. The research chronicles the life of two Beesi networks, one with 23 members and one with 60. One takes in installments monthly, and the other weekly. Payouts are by lottery. The payout for the larger of the two is $479, and the smaller $125. The drawing of the lottery takes place in front of all the members. However, based on mutual understanding, the Beesi payout is often transferred from the winner of the lottery to the person in most need. A large proportion of the income gets managed this way. The women who organized both of Beesis in the study reported that members will skip meals in order to pay their Beesi installments.
Although people’s everyday needs predominate in their use of money, their religious and ritual obligations are expensive. One interviewee spoke at length about these obligations and their cost. But this is a cost worth it for maintaining one’s position before one’s neighbors and God, a position that remains important to these poor but skilled artisans whose craft connects them to a more glorious past.